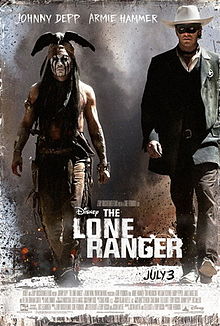 1.  The story – love that Disney tackled a Classic – a story my parents loved and I enjoyed.

2. Johnny Depp’s performance – I was surprised at how well Depp played Tonto.  I feared that it would be to light and not enough depth to the character.  I was very wrong.

3. The scenery – honestly some of the most beautiful shots of the natural scenery.  Stunning.

4. Silver – ‘played’ by a startlingly beautiful horse that is filled with the personality and tricks the ‘character’ needed to embody.

5. The Special Effects – from train crashes to explosions, the movie does not disappoint – it kept me on the edge of my seat throughout the whole film.

Admittedly, I was a bit hesitant to see this film. I love the story but as someone who studied Native American history I was worried about the portrayal of Native Peoples and whether or not it would be accurate.  I was pleasantly surprised that the film showed the settlers as the barbarians and the Aboriginal people as respectful and caring.

I loved the action, the humour, the special effects, the acting and the storyline.  All of them kept me on the edge of my seat throughout.  One of my favorite part is the suspense of when the Lone Ranger theme song would be used and they saved it to the perfect moment.

Would I recommend this film:  Absolutely!  This is a film everyone, young and old will love.

From producer Jerry Bruckheimer and director Gore Verbinski, the filmmaking team behind the blockbuster “Pirates of the Caribbean” franchise, comes Disney/Jerry Bruckheimer Films’ “The Lone Ranger,” a thrilling adventure infused with action and humour, in which the famed masked hero is brought to life through new eyes.  Native American spirit warrior Tonto (Johnny Depp) recounts the untold tales that transformed John Reid (Armie Hammer), a man of the law, into a legend of justice—taking the audience on a runaway train of epic surprises and humourous friction as the two unlikely heroes must learn to work together and fight against greed and corruption.

‘The Lone Ranger” rode into theatres on July 3, 2013.  For more info check out their website http://disney.go.com/the-lone-ranger/