I’ve been thinking a lot about my pregnancy with my twins and how much I enjoyed it.  I loved being pregnant.  I felt fantastic.  I glowed.  I waddled.  I barely fit behind the wheel of my car.  And, I loved it.

My husband and I tried for about 7 months before we became pregnant.  It turns out that all those period charts and taking my basal body temperature were useless compared to too many glasses of wine on vacation ;)

I am an educator so September is super busy for me.  So busy that I didn’t notice a missed period.  About a week and a half after my period was due I woke up in the dead of night thinking “I’m pregnant.”  I was so sure that I woke my husband and told him.  He didn’t believe me and went back to sleep. I tried to sleep but tossed and turned till the morning.  First thing I got up and took a pregnancy test.  It was positive.  I took another.  It was positive too.  I woke my husband up and showed him the tests in kind of a “Hah, I told you so” way.  We were excited but for some reason it didn’t really sink in.  Later that day I called my doctor’s office and spoke with the receptionist.  I said, “I would like an appointment, I think I might be pregnant.”  She asked why I thought I was pregnant.  Once I told her about the two pregnancy tests she laughed and said, “Congratulations Kerrie, you are pregnant!”  That is when it hit me.  Really?  I didn’t need some sort of official test?  Are there no false positive pregnancy tests? Apparently not. 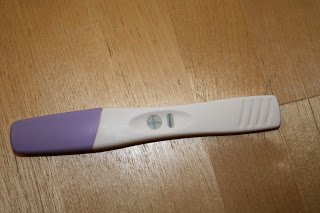 That was the beginning.  I followed the traditional idea of keeping it a secret until three months had passed.  I had my first doctor’s appointment, I scheduled an ultrasound and began to tell people at 12 weeks.  My parents were ecstatic, my colleagues thrilled, and my friends delighted.  It was an exciting time.  I felt pretty good those first three months.  I had a couple of days that I felt nauseous (almost like being hungover) and I napped after work frequently.  I craved smoothies at 10pm and other than some delightful bowls of potato chips I ate really well.

Leading up to my ultrasound I had a recurring dream.  I was having twins and I couldn’t fit two cribs into the room I had planned to be the nursery.  I woke up in the morning panicked trying to wrap my mind around this idea.  Twins run in my family (for generations) so I assumed these dreams were caused by the knowledge that twins were possible.  My husband thought the dreams were crazy and told me not to worry.

Tuesday November 10, 2009 I went in for my ultrasound. The technician took me into the room by myself and said that after they were done the measurements etc. that my husband could come in.  I laid there and stared in awe at the screen.  I watched her take measurements, write stuff down and I guess because I had never been through this before I didn’t realize that it was taking a long time.  I was happy to see a baby and a heartbeat and thought it was truly miraculous.  Then, the technician said that she was going to show me one heartbeat, and then another one.  I was stunned.  I thought she was showing me two sides of the same heart.  Nope, I was HAVING TWINS!  There I was lying on the table without my husband and I was pregnant with twins.  I had dreamt it, but now it was really happening.  The technician went out and got my husband.  She told him “Sorry it took so long, it is always longer when there are two babies.”  Martin, did not register this statement, he was too excited to see a baby up on the screen.  Then, she showed him a view of two babies.  To say he was super excited would be an understatement!  I’ll never forget the look on his face.  The awe, the shock, the excitement.

We left the clinic in a daze.  We phoned my parents (who were on vacation) and I immediately called one of my friends who is a twin.  We started spreading the news to other friends and family. Then, we let it sink in. We were pregnant with twins!

Even years after finding out I was pregnant with twins it is still something that I marvel at.  I was blessed with two babies.  There are days when I definitely wished there was only one because I was overwhelmed by two.   But, in my heart I felt and still feel like the luckiest women alive. Two heartbeats that are everything I could have ever hoped for.